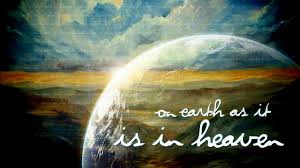 Where is God?  As Christians, we believe just because we know or we assume something to be true.  There are some who won’t believe until they see God and heaven.  Downside of this is that they may never get to see until they pass from this life.  By then, will it be too late for an “I told you so.”  Hence, we look for God’s presence, God’s reality, and indicators of God’s existence in our world.  Jesus also used words like “My father’s kingdom.”

In Luke 17:21, Jesus taught that God’s kingdom is neither here nor there.  His followers, including some of his disciples, had thought that his coming kingdom was going to be a secular government on earth.  Jesus was actually referring to a spiritual kingdom.

So where is God’s kingdom on earth?  It is current.  It’s happening in the here and now.

God’s kingdom can be understood as God’s purpose or God’s will happening in this world.  God’s purpose or will can be happening in your own lives.  It can be within our society and culture.  It can be within your place of habitation, within my yown community, and yes, even in my secular place of work.  It is working and functioning within God’s people and where God’s people are glorifying God and doing God’s will.  When God’s will is done, as it is in heaven, then we can say that his reign or kingdom is coming.

In the end, it will always come back to the question of faith.  If you can honestly affirm the above question with an affirmative “Yes”, it takes faith to believe the unseen.

“I know not what course others may take; but as for me, give me liberty or give me death!”

Liberty cannot be established without morality, nor morality without faith.