The timeline of modern Israel’s re-birth (May 14, 1948) till now (May 14, 2018) will be exactly 70 years. This Monday’s date of May 14, 2018 is significant because the U.S. Embassy will be officially relocated to Jerusalem exactly 70 years on this day of 14th of May 2018.  After this takes place this Monday, 14 May 2018, other nations might also begin recognizing Jerusalem as Israel’s capital and move their embassies to Jerusalem. 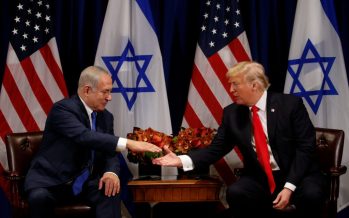 This bold move might encourage other nations to do the same.  Why was this a gutsy move?  It implies that Jerusalem is the capital of Israel; and it also implies that Israel is a sovereign nation and has the power of self-determination.  Why have world leaders been so spineless when it comes to recognizing Israel’s right to sovereignty and self-determination?  Fear.  Obama and Trudeau will recognize smaller nations’ right to self-determination, including First Nations and treaty rights, but what about Israel?!

Despite opposition from Israel’s Muslim neighbours, Trump actually carried out what he said they would do. Many people had doubts this relocation would actually happen, but it did. Kudos to Trump for doing this.  Many politicians have feared the political backlash from Arab-Muslim nations.  George W. Bush wanted to do it too but he did not have the will to make it happen.  To date, no world leader has had the courage and resolve to make this happen, until Trump.  Despite the liberal media’s non-stop punishment of him for defeating Hillary Clinton, Trump continues to do what he thinks is right.

Every country has its sovereign right to choose its own capital, including North Korea, Iran and Cuba.  So why not Israel?  The United States has chosen to recognize Israel’s sovereign right by moving its own embassy.  Throughout history, the threat of retaliation and increased violence has hindered national embassies from moving to Jerusalem.  But, let irony rear its head.  Question.  Wouldn’t it be ironic if this move actually brought more peace and stability to Arab-Israel relations?  There is the possibility.  However, time will tell.

Despite Trump’s flip-flop on some international trade agreements like NAFTA, there is something solid about Trump’s foreign policy.  It is no wonder why some have aleady recommended him for a Nobel Peace prize. He is slowly and surely earning the respect of more people around the world, including that of Prime Minister Benjamin Netanyahu and others.  This move of the U.S. Embassy will go down in history as the right thing to do.