In the movie Star Wars: The Last Jedi, the struggle between the darkside and the lightside is like an internal spiritual struggle that everyone can identify with. Everyday, we struggle with making choices between right and wrong.

Kylo Ren tried to entice Rey into the darkside; and Rey tries to draw Kylo Ren into the lightside.  It’s a Star Wars simplified version of spirituality–a human moralism of good versus evil.  Rey was helpless in the hands of the Supreme leader. Kylo Ren was also helpless in overcoming his entry into the darkside.  And if it weren’t for Luke Skywalker’s intervening at the right moment, Rey would have come very close to entering the darkside.

The Last Jedi was not the typical Star Wars movie.  Lots of inner conflict, and spiritual soul-searching as to who they are, where they come from, and where they belong.  There is not much hope for Kylo Ren coming into the light.  Humanism places hope in the goodness of humanity.  Even if he were to turn to the light in the future Star Wars IX, we can see how weak humanity is in the face of the darkside.  There will not be redemption for Kylo Ren who killed his own father Han Solo to escape his past.  Humanism doesn’t provide healing for his guilt and shame. 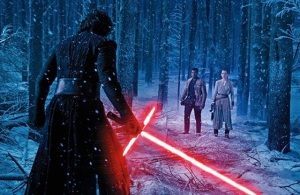 The winning outcome from this type of spirituality depends on who has more power at what moment in time.  As human beings, we need a spirituality that is independent from human power or how we use or misuse the Force.  This gives our own human influence more credit than it deserves.  Humanism is deceptive as the darkside.

If you’ll allow me, Christian spirituality is different from the Star Wars type of spirituality. The solution to overcoming the darkside doesn’t depend upon our human influences of good or evil.  In Christian spirituality, we take the starting position that darkness already reside within all human beings. Our fall into sin had already begun since the beginning of creation at Adam’s fall into original sin. Sin and elements of the darkside reside in all of us which we cannot escape from.  We are helpless in the face of darkness because we are incapable of choosing the light, as St. Augustine would have it.

Therefore, we need God’s recreative force of light, external to humanity, in order to overcome the inescapable chasm of the darkside.  As Christians, we believe in the sovereignty of God, in redemption and forgiveness from our wrong-doing.  God is our Supreme Leader and his will is to conquer evil and death to save us from the consequence of the falling into the darkside.  The Lord God will reign victorious on the Final Day of our redemption.  This will happen whether we play a part in it or not.  It is inevitable; the lightside will prevail.  It is God’s battle and we can either participate or sit by the wayside.

In the Gospel of John, it speaks of this powerful light who is the ultimate force in this universe:

“The Word gave life to everything that was created, and his life brought light to everyone.  The light shines in the darkness, and the darkness can never extinguish it…,.The one who is the true light, who gives light to everyone, was coming into the world.” (John 1:4-5, 9, NLT)

This light is Jesus Christ, who comes to us as Emmanuel (God with us).  Prepare for the Advent of the lightside this Christmas.  May God’s Force be with you.  May his Holy Spirit empower you to fulfill his mission.